I somehow Agree and at the same time, disagree with this list, but all in all, they are our Kenya Authors and we ought to be proud of them?

The father of satire and humour in Kenya was for years the most popular columnist in East Africa. Behind the mirth, however,  was one of the most vicious critics of government who penned award-winning novels like Jail Bugs and Three Days on the Cross.

The Caine Prize for African Writing award winner is credited for introducing a new genre in the country by founding Kwani? which rebels against the established literary tradition.

Selected in 2005 as the 73rd topmost intellectual person in the world by Prospect Magazine (UK) and Foreign Policy (US), he first rose to prominence as a critic of some of the accepted orthodoxies of African intellectuals in the 1960s and 1970s. The Trial of Christopher Okigbo was critical of African socialism and all strains of Marxism. His television series, The Africans: A Triple Heritage, established his polemic style of writing where he uses parallels and contrasts.

A professor of English at Princeton University, he is one of World’s leading literary critics. He is best known for his co-editorship (with Abiola Irele) of The Cambridge History of African and Caribbean Literature; easily the most comprehensive survey of its subject.

With more than 25 titles of award-winning novels, government-upsetting plays and mature children’s books, not to mention countless essays, Ngugi is Kenya’s best shot at the Nobel Prize for Literature.

The author of A Grain of Wheat and the Wizard of the Crow is mentioned in the same line as such Nobel laureates as Naguib Mafouz and Wole Soyinka.

Arguably the country’s best-ever short story writer who died before his prime, he’s best known for the poignant Voices in the Dark.

Described by critics as Kenya’s Anton Chekhov because of deftly combining medicine and writing, the surgeon is the award-winning author of 10 novels including The Price of Living.

He is a recipient of the Commonwealth Literature Prize and his book has also been nominated for the International IMPAC-DUBLIN Literary Award. 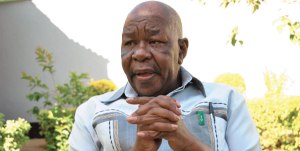 Prof Imbuga, who died last year, was arguably Kenya’s foremost playwright, following his now famous play Betrayal in the City with a succession of other equally successful ones, including The Successor and Redemption.

Regarded as the mother of modern literature in Kenya, her texts such as The Graduate, The Promised Land, Land Without Thunder and The Other Woman are rich in African idiom and imagery.

One of the most prolific cross-genre authors in the country, Macgoye has captured the plight of women and the girl child in her poetry and novels like Coming to Birth and Homing in.

Born in England, she emigrated to Kenya in 1956 and has mastered the Luo language. She writes some of her works in Dholuo.

The film-maker now resident in the US was selected for his satirical presentation of the everyday struggles of ordinary Kenyans in such novels as Going Down River Road and Kill Me Quick.

His other titles include The Cockroach Dance, Carcass for Hounds, The Bushtrackers, The Return of Shaka and Weapon of Hunger.

Kenya’s founding father published, in 1938, his anthropological book, Facing Mount Kenya, which has been hailed as a classic.

He also wrote Kenya: The Land of Conflict, My People of Kikuyu and The Life of Chief Wang’ombe, all in 1944.

Maillu has published more than 70 titles in the past 50 years. A largely self-educated man, Maillu is best known for such popular titles as Unfit for Human Consumption, After 4.30, and My Dear Bottle.

Kulet is one of the most consistent literary voices in the country. Since the publication of the acclaimed Is it Possible? in 1971, he has published every other year. He won the 2008 Jomo Kenyatta Prize for Literature for Blossoms of the Savannah, a feminist work.

The author of Across the Bridge, which took Kenya’s schools and households in the 1980s and 1990s by storm, firmly established the hotelier as one of the pioneers of the popular genre in the country.

His other titles are Two in One and The Ivory Merchant as well as a number of children’s books. He has now crossed into the film genre.

One of the pioneers of the popular genre in the country, he is best known for The Minister’s Daughter. His other popular novels are What a Life, The Love Root, What a Husband and Future Leaders.

Odaga was picked for her pioneering role in oral and children’s literature. One of the earliest indigenous publishers, Odaga authored such novels as A Bridge in Time, Riana and Between the Years.

The award-winning author of The River and the Source (A KCSE setbook in 1990s) died in 2011. One of the foremost feminists in the country, she wrote such other novels like I swear by Apollo and Place of Destiny.

Mochama has earned his space on the literary high table for his consistent poetic style. The prolific poet, novelist and journalist has penned such titles as What if I am a Literary Gangster?,

Princess Adhis,  Naija Coca Broda and The Road to Eldoret. His novel Meet the Omtitas is a finalist in this year’s Burt Award for African literature.

The playwright and poet is one of the most influential writer-activists of her time.

Beside co-authoring the Trial of Dedan Kimathi with Ngugi wa Thiong’o, her other works include The Long Illness of Ex-chief Kiti, and Daughters of My People, Sing!

One of the leading female writers of the older generation, her one-act play The Scar won an award at the Kampala National Theatre in 1963.

Her Ripples in the Pool (1975) is regarded as the first sustained portrait of a lesbian within the context of post-colonial African Literature.

The departed writer is arguably the country’s king of children’s literature having published more than 40 titles, which connect with the experiences of the Kenyan child.

She is considered the matriarch of children’s literature and one of the most prolific authors of books for children.

Kola was chosen for her pioneering role in oral and children’s literature. She is credited for introducing oral literature to the formal classroom through adaptation of folklore.

A brother of authors Leonard and Ngumi Kibera, the late Kahiga is best known for Dedan Kimathi: The Real Story. His other works are When the Stars are Scattered, Flight to Juba and Paradise Farm.

The playwright and activist is best known for Kilio cha Haki, which has been selected as a school setbook twice.

Mulwa is one of the most recognisable faces of theatre in Kenya. A prolific novelist and playwright, some of his 15 published books include Redemption, Master and Servant, We Come in Peace and Glass Houses.

The most examined Swahili author in the last 10 years, Walibora shot to national fame with the publication of Siku Njema, which established him as a major Swahili writer. His other works are Ndoto ya Almasi, Ndoto ya America and Diwani ya Karne Mpya.

This writer revolutionised Swahili learning at primary school level. His series, Kiswahili Mufti, has been at the centre of Kiswahili learning in the country and out. He also writes poetry alongside other literary material.

The self-published author’s two creative works won the Wahome Mutahi Literary Prize in 2010 and 2012. One of the most prolific writers of his generation, he has penned 10 books including Different Colours and the novella, Terrorists of the Aberdare.

Born in Kenya and raised in Tanzania before moving to Canada, Vassanji is one of the most acclaimed writers of Indian descent. His writings focus on the condition of East Africa Asians. The author of Gunny Sack and The Assassin’s Song has been awarded the Commonwealth Regional Prize, among other several accolades.

He is an author of Swahili novels, plays and all. Harufu ya Mapera and Nguvu ya Sala are some of his texts. But he is better known for writing Chemi Chemi za Kiswahili, which is a classroom text, and peers think of him as a writer with a mastery of the Swahili language.

A professor of Swahili at Kenyatta University, the  critic and poet has penned several texts including Mwana Kupona.

The author, who begun as an illustrator and designer, now has 10 novels to his name. Some of his books are The Salem Mystery, which won the Jomo Kenyatta prize’s adolescent category in 2003 and The Red Coat, which was nominated for the Impac Dublin Award 2010.

She has authored numerous readers agitating for gender equality and the rights of the girl. They include Pendo Katika Shari and Nakuruto, a novella.

His title, Child of Two Worlds, published in 1965, was among the early titles in the famous African Writers Series published by Heinemann Educational Books and at one time edited by Chinua Achebe.

He became one of the first indigenous published authors in 1934 with An African Speaks for his People through the publishing firm started by renowned British literary personalities Leonard and Virginia Woolf in London.

He was among the earliest indigenous Kenyan writers whose works gained recognition more than a century ago.

The first person from upper Eastern region (Isiolo, Marsabit and Moyale) to be appointed an ambassador, his books include The Hills are Falling.

Do you agree with this selection?

10 thoughts on “Best Authors From Kenya.”