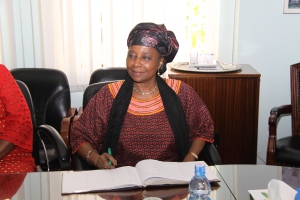 Micere Githae Mugo (born Madeleine Mugo in 1942) is a playwright, author, activist, instructor and poet from Kenya. She is a literary critic and professor of literature in the Department of African American Studies at Syracuse University.

She was forced into exile in 1982 from Kenya during the Daniel Arap Moi dictatorship for activism and moved to teach in Zimbabwe, and later the United States. Mwalimu Mugo teaches Orature, Literature, and Creative Writing. Mugo’s publications include six books, a play co-authored with Ngũgĩ wa Thiong’o and three monographs.

She has also edited journals and the Zimbabwean school curriculum. The East African Standard Century listed her among the most influential people in Kenya in 2002

Mugo is a distinguished poet, and the author or editor of fifteen books. Her work is generally from a traditional African, Pan-African and feminist perspective, and draws heavily upon indigenous African cultural traditions. She has also collaborated with the Zimbabwean writer Shimmer Chinodya in editing plays and stories for adolescents in Shona.

Writing & Speaking from the Heart of My Mind, Africa World Press 2012

2 thoughts on “Who is Micere Githae Mugo?”